Recently, I was approached by a client who are a live band for weddings, functions, parties and corporate events – Living Large. They needed a new website for several reasons…

They wanted a new website as their previous one was struggling to make in-roads on the search engines. Initial SEO work had already been carried out, but it’s efficiency was hampered by the fact that the site was built in Flash. Not only is Flash invisible on iOS mobile devices and tablets, but it is not search engine-friendly either as the content is not something Google, Bing etc can read.

The band wanted to have some control over content, so WordPress was chosen for it’s search engine and end-user-friendliness.

The previous Living Large site was entirely Flash-driven and had animations that appealed to the band and they were reluctant to lose, so the new site had to incorporate this, and thanks to a bit of jQuery, HTML5 and CSS3 (courtesy of Hype) I was able to include a welcome animated banner on the landing page. A Flash rotating globe element was kept and replacement on iOS devices used via a bit of scripting.

A jukebox was added using the MP3-jPlayer plugin and this means the band can also add and edit their own sample sounds and performances.

They are offering free CDs and brochures to anyone looking to book a live band for their wedding, party, function or corporate event. Why not give them a try? 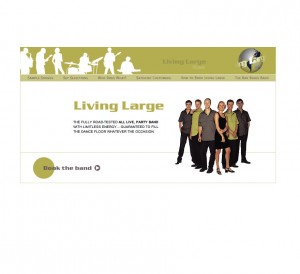 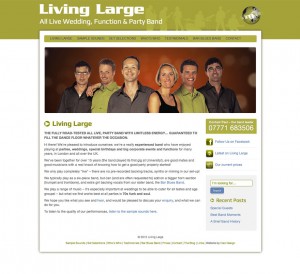 Adding Keywords and Descriptions in Contribute

What do you think?