My preferred app for screen captures or grabs on my Mac is Snapz Pro, however, sometimes I use the native OSX app Grab for measurements etc. This has the handy crosshairs that let me measure distances on web page elements for example.

I have just discovered a handy tip (that was in the Help docs all along…) that I thought I’d share. Firstly, to take a grab of the whole screen, use cmd + shift + 3.

If you want to grab only a section of the screen you need to use cmd + shift + 4. This lets you draw around the area you want to capture, with a rectangular marquee. 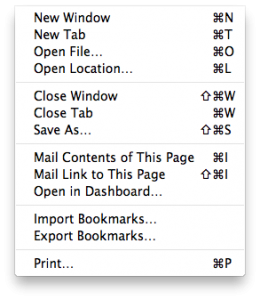 Capture a Menu in OSX

The tip is this, if you want to capture a whole app window, press the space bar and a camera icon appears. Click the window and the capture is taken.

Better still, if you click on a drop-down menu then use the shortcut and the spacebar, you can click the menu itself to take a capture of that on it’s own.

This is built right in to OSX and it is extremely handy. If you don’t like the .png format that the files are saved as, open them in Preview and use Save As.. to change file type.

Snapz Pro has plenty of other features on offer that include making movies from what is being seen on your monitor, but Snow Leopard has included this feature inside it’s new version of Quicktime. Simply go to File > New Screen Recording and a new panel appears with a red button in the middle. You can choose to include an audio track from either a Line-In or using the built-in microphone, the movie quality and where to save the file. Once you press the red button to record, a new Stop Recording button appears at the top-right of your screen, or you can use cmd + ctrl + esc if you prefer.

Deleting emails on the iPhone

Screen Capture on an iPhone

IOS 4.2.1 and Portrait Lock
other page


What do you think?